Sixteen names were initially in the running for Gordon’s new Mayfair restaurant, but one really struck a chord. Lucky Cat by Gordon Ramsay. Discover the reasons behind the name, and how the Lucky Cat has been incorporated into the restaurant's design.

Lucky Cat, the restaurant, is an Asian eating house inspired by Japanese youth, vibrancy, and urban cool. Lucky Cat (or Maneki-Neko), the animal, is highly symbolic in Japanese culture. Showcasing such an important cultural concept was quite an undertaking, and it was vital for the development of the restaurant’s richly layered identity. The interior design team at AfroditiKrassa took inspiration for the restaurant's design both from its new name and the history of the Maneki-Neko, as well as from the popular Kissa clubs of 1930s Tokyo, visualising the kind of crowd that would be frequenting these places.

Why is the Cat Lucky? 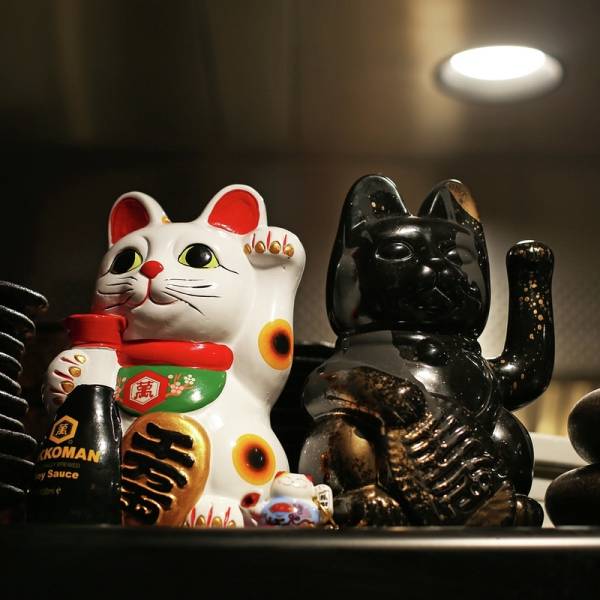 Maneki-Neko is modelled on the Japanese Bobtail breed, and they’re prolific in businesses, homes, and restaurants. This cat is a big deal, but why is it supposedly lucky?

Folklore surrounds the cat, and nobody seems to know exactly where the origins of its luck stem from, but they all follow a similar pattern. One tells the story of a poor man running a failing shop. A stray cat appeared, and instead of chasing it away, he fed it. The cat repaid his kindness by sitting outside the shop, beckoning in customers and making him rich.

Another legend describes the cat as a saviour of life, not just of business. A priest’s cat began beckoning to him and he thought that the cat must have a message from the gods. When he walked over to it, a branch fell exactly where he was sitting. It would have killed him if it wasn’t for the cat’s beckoning. Because of stories like these, the Maneki-Neko has become a strong symbol of prosperity for business, and a good luck charm for families.

Lucky Cat felt like a very fitting name for this new venture. The cat is a sacred animal, the beckoning Maneki-Neko welcomes patrons but also bring good fortune. When developing the restaurant's design, AfroditiKrassa loved the way that the cat “emotionally creates an immediate connection" and said that "there are so many stories [about the Maneki-Neko] to be told and so many possible playful extensions”. The team felt that design elements within the Asian eating house could reflect “an innocent expression as well as a more ‘naughty’ feline creature”. 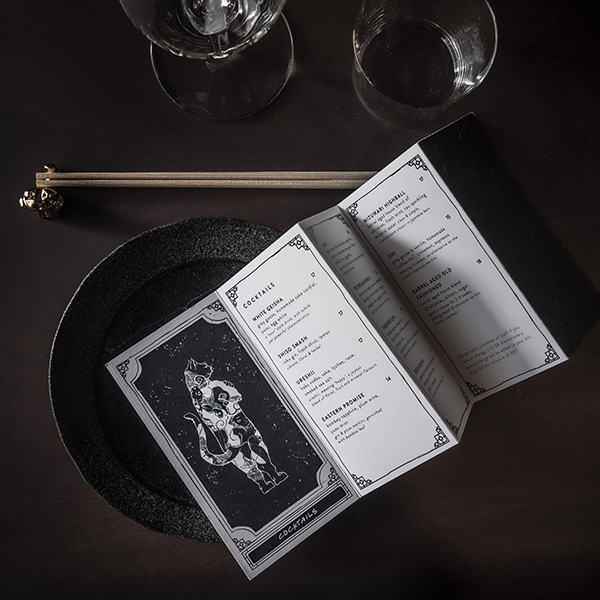 The design of Gordon's Maneki-Neko is less Japanese bobtail and more sleek monmon cat, emanating power, confidence, and fun. A monmon cat is effectively an old Japanese illustration of a tattooed cat. Afroditi suggested this style of cat drawing because “they really reflect the spirit of the young, Tokyo urbanites who used to frequent the cool, jazz bars of the 1930s”.

The deep blue colour of the Lucky Cat logo is reminiscent of block printing with ink, again a very Japanese theme. Colour is an important theme for all Lucky Cats, and the colour of the cat always tells its own story. Calico is the traditional colour for Lucky Cats and is considered the luckiest. A nod to the calico cat is given in our cream font in logos and menus. Gold and yellow, the colours of wealth and prosperity, are highlighted in warm brass fittings and golden cat chopstick holders, and green, for good health, can be seen in natural planting.

In order to keep the Lucky Cat design stylish and considered, subtle and sometimes cheeky cat references are made throughout the interior. The standout feature is a Maneki-Neko cat wall behind the main bar, decorated with nearly 300 individually handmade and painted ceramic cats – each is entirely unique.

Unfortunately our doors are temporarily closed but bookings are open for future dates and we can't wait to welcome you back soon.

Unfortunately our doors are temporarily closed but bookings are open for future dates and we can't wait to welcome you back soon.