THE HISTORY OF THE SAVOY GRILL

With over 100 years of service, the Savoy Grill is more than just another London restaurant, it’s an institution. The Savoy Grill is the restaurant destination for everyone from theatre-lovers to royalty, gracefully evolving to suit its guests’ every possible need.

There has been a Savoy Grill as long as there has been a Savoy Hotel, but not as we know it today. When Richard D’Oyly Carte decided to open a hotel to go alongside his Savoy Theatre in 1889, he included two restaurants from the outset. The formal, French fine dining room was upstairs and would later become the home of ‘the king of chefs’ Auguste Escoffier, while the Grill was originally downstairs.

Although women were technically allowed in the Grill, it had a distinctly masculine feel and was treated like part of a gentlemen’s club - classic meat dishes as opposed to fancy French fare, smoking and billiards rooms and an American Bar for strong spirits and cocktails as opposed to the traditional soda mixers. It was quieter and more private than the main restaurant, the perfect place for like-minded men to conduct business or to simply escape the fuss and frills of society.

Like everything at the Savoy though (the first hotel to offer central heating, lifts to all floors and private bathrooms), it was always on the pulse of society changes. The American Bar was run by female bartenders and you didn’t have to change for dinner, making the Grill the go-to destination for anyone enjoying the buzz of London life. When the Grill moved to its current position at the front of the hotel in 1904, its link with the theatre-world was strengthened and it naturally embraced the open-minded attitude this promoted. Decorated in a more feminine, light and airy neoclassical style, the Grill was now a place where ladies could dine without a chaperone, were not restricted to evening dress and could even keep their hats on while dining. 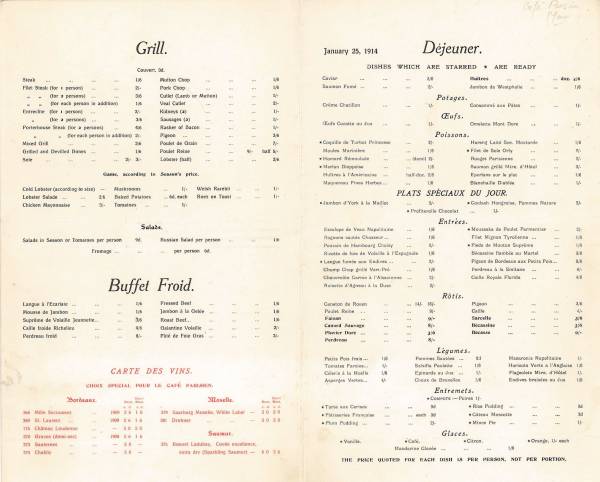 At this time the Grill was also temporarily rebranded ‘The Café Parisien’ but this didn’t catch on. At its heart the Grill was still a casual dining destination that did proper, hearty food and drink well. Not exclusively British, French or even American as the name suggests, just exceptional classics. Its appeal was, and still is, that it was open to everyone, it felt familiar yet special at the same time. Plus, you never knew just who was going to walk through the doors or be sat at the table next to you…

Read more about the famous faces and celebrities at the Savoy Grill.

From the 1900s, the Savoy Grill became the place to be, and be seen, in theatreland. Evenings would see the dining room overtaken by actors and directors after performances, while during the day, ‘creative types’ (writers, critics, composers and producers) would gather for long lunches and attract wannabe young actors and actresses looking for parts. With the growth of the film industry, Hollywood stars were soon flocking to London where the Grill gave them a chance to escape the hounding of the press. A street entrance (where the wine collection now lives) meant the likes of Charlie Chaplin, Judy Garland, Errol Flynn and Elizabeth Taylor could enter without the pomp and ceremony of the main hotel foyer, and dine in peace with the knowledge that staff at the Grill were known for their discretion. 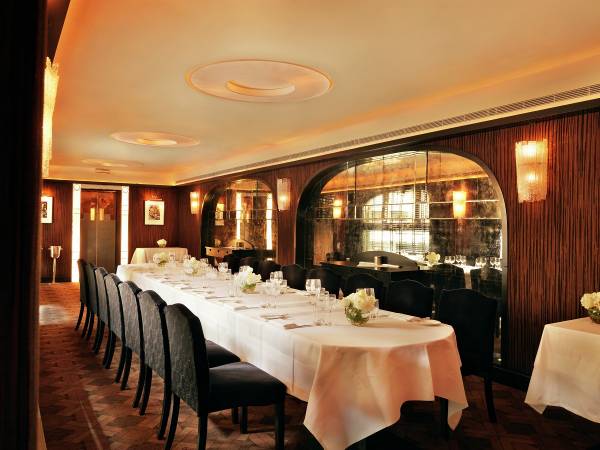 Not just popular with the acting world, the Grill has been nicknamed over the years both the ‘second House of Lords’ and the ‘City Canteen’. The Grill offered just the right balance of prestige and intimacy without the strict confines of Westminster, making it an attractive destination for both peers and ministers alike. Winston Churchill was a regular at the hotel, dining at both the main restaurant and the Grill right from his youth to his last public dinner in 1964. As a location, the Savoy hotel was hugely significant for Churchill, in 1910 he set up ‘The Other Club’ - a dining society to rival the famous gentleman’s ‘The Club’ - which still meets today in one of the Savoy’s private dining rooms, and in 1940, it was where he received the phone call inviting him to take on the country’s leadership for that crucial period during World War II.

As business in London boomed in the 1970s, businessmen would make the short trip from Fleet Street to escape the office and impress clients. In fact, it was often said that more deals were closed in the Savoy Grill dining room than in the boardrooms of the City. The maître d had a crucial role in the success of business and political dealings, he alone had the power to ensure you had the table you wanted or to persuade the chef to serve a certain dish. A familiar greeting from the maître d signified you were a regular at the Grill and therefore someone worth knowing. One such legend was Angelo Maresca, maître d for over 20 years during the 1980s-90s, a man known for his shrewd manipulation of the dining room to meet every guest’s requirements. A table next to the bust of John Kennedy? No problem, Mr Maresca would move the bust next to an available table rather than disrupt his regular diners.

In more recent times, the Grill has evolved alongside changes within the London dining scene, but still managed to maintain its special je ne sais quoi. The restaurant explosion of the 1990s meant that hotel restaurants, once the mainstay of the London dining scene, now had to compete to attract guests more than ever before. The Savoy brought in Gordon Ramsay Restaurants in 2003 to give the Grill a lift, with a refurbishment and new culinary expertise to help cut through the competition.

With the clear leadership of Gordon and his team, the Savoy Grill shows it strength through the test of time. The dining room is just as popular as it was 130 years ago which, with the current trend for flash-in-the-pan and pop-up restaurants, is not something a lot of places can say. Regular diners can still enjoy classic dishes with the exceptional service that the Grill became famous for, but with sophisticated and modern touches that suit a dining destination in the heart of London. Compare a menu from 1914 where Lobster Salade, Pâté de Foie Gras and Filet de Sole featured, to today’s Cornish crab salad, Foie gras torchon and Grilled Dover Sole, and you’ll see that things haven’t changed that much. Classics refined to modern palettes and with a focus on seasonal produce at its best. 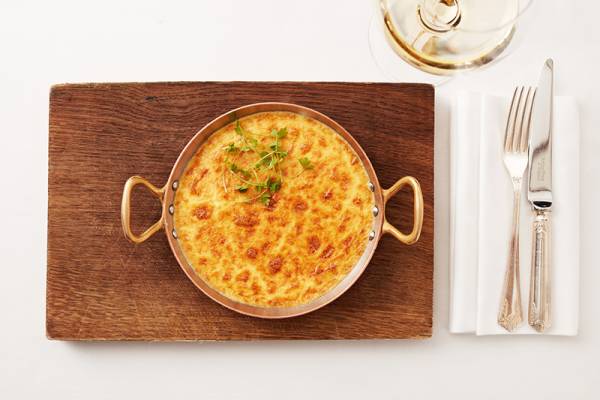 As proof of point, the Grill’s perhaps most well-known dish, the Omelette Arnold Bennett - created and named for the writer while he was staying at the hotel during the late 1920s - has been a familiar sight on the menu for the past 90 years. A rich concoction of smoked haddock, eggs and creamy sauce, you could equally imagine it powering a business lunch, being devoured late at night after a raucous performance on the stage, or perhaps even entertaining visiting lords, ladies and royalty…

Book a table at the Savoy Grill to experience this iconic dining institution for yourself.