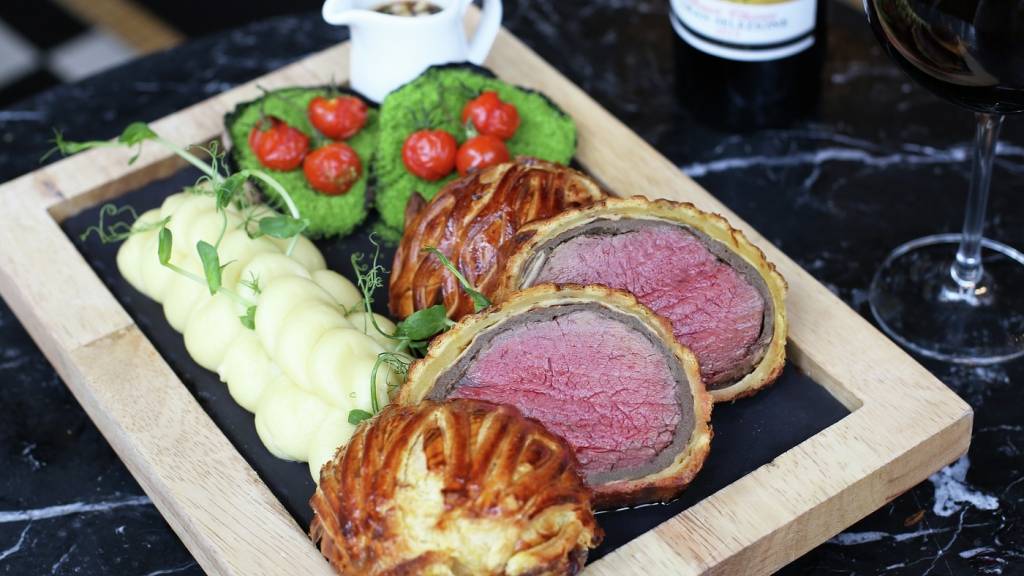 Whether they’re at the Savoy Grill or Heddon Street Kitchen, our guests love learning how to create Gordon’s signature dish alongside our chefs. But what is it actually like to participate in a Beef Wellington Masterclass? We attended one of our own Beef Wellington masterclasses to see exactly what it’s like for guests.

Greeted with coffee and breakfast at maze Grill Mayfair, we were then treated to a tour of the kitchens before tying on aprons and getting down to work.

After cooking up all of our beef wellington ingredients under the watchful eye of Chef, we then left them to chill in the fridge for around half an hour. During that time, we’ve been chatting, asking all our burning kitchen questions, and sampling some delicious treats. Not a bad start!

Grouped in the kitchen, one of the most important things we learnt from Chef, is ‘the more cling film the better’ as he put a large roll of cling film on the counter.  ‘When I cook at friends’ houses, they can’t believe how much I get through...’

Then it was time to roll the puff pastry, mustard-coated beef fillet, mushroom duxelles and herb pancakes together. What we were taught is exactly what the cookbooks and glossy food magazines don’t tell you: get a big roll of cling film, because you’re going to need it. (That is, if you want to cook Beef Wellington like a pro!)

We trimmed the pancakes into a square slightly smaller than the egg-washed pastry, which sits at the edge of the unrolled cling film. The mushroom duxelles (in our case, mixed with chicken mousse also freshly made this morning) is then spread on top – ‘Not too much, remember it’s about the beef,’ says Chef.

On goes the mustard-painted beef fillet, seared earlier on a plancha that was so hot we had to keep leaning away from the range. Then: engage cling film!

At first, we’re using it a bit like a bamboo sushi mat, to help lift the stack up and over into a log shape, tucking the edge of the pastry under but pulling the cling film back so it doesn’t get wound up in the Wellie. ‘Try to feel the pastry stretching as you do it,’ says Chef. ‘Now check it.’

We lift up the rolls to look at the seam – some of the filling has oozed out and smeared itself thinly over the bottom. Apparently not a problem. ‘No, slightly overlapping is good. You don’t want too much pastry underneath,’ he says (we presume this is to prevent a soggy bottom).

When the cling film is finally cut, we twist the ends to make a bon-bon. But not like a sweetie wrapper. We’re twisting over and over and over, as though using an arm cycle at the gym. ‘It’s like wringing a towel,’ says Chef, encouraging us to wind further still.

The finished parcels are plump and tight and need to rest in the fridge – ideally for another couple of hours as patience is the key with this dish. The butter in the pastry needs to set again. A tip when cooking at home is to speed this process up by sticking it in the freezer – we had the restaurant’s blast chillers to make use of!

Once the Wellington was rested, we carefully unwrapped the cling film and brushed the pastry all over with beaten egg and chilled it yet again. Chef told us that egg washing it a second time, once the first has set, will give the Wellington an extraordinarily rich colour.

He then showed us how to make a classy chevron pattern on the pastry using a skewer, then at last it’s into the oven. For only 20 minutes, because all we’re doing is cooking the pastry. Chef said to us that we shouldn’t ‘try to test the meat temperature when it’s in the oven, it will only be 32°C. The meat finishes cooking in the residual heat, when the Wellington is out of the oven and resting for 7 minutes.’

Lesson 4: It’s Worth the Wait

By this point we’re ready to sit down, and tuck in. We move out of the kitchen and to maze Grill’s Butcher’s Block table for Ayala champagne and plates of sushi, sashimi, buffalo chicken and charcuterie. The sommelier checks preferences, then talks us through the wine he’s chosen to accompany our Beef Wellington: Enzo Bianchi 2012 Malbec Reserva. It’s exquisitely smooth and delicate for a big 14.5% abv wine.

When Chef arrives with the Wellingtons we not only feel proud, we can see the devil in the details – how the tips and tricks we’ve picked up today have created something far superior to what we could have made at home with only a recipe book to guide us.

‘The sense of accomplishment when you see something like that is incredible,’ says Ralph, one of the participants. ‘And it tastes better when you’ve made it yourself!’

As we are finishing an equally spectacular array of puddings, the spare Wellingtons we’ve constructed are brought out in picnic bags to take home and enjoy during the week. Beef Wellington for a quick after-work supper? Sure: the work’s been done, so all they’ll need is 20 minutes in the oven.

‘Beef Wellington really is the ultimate do-ahead dinner party dish,’ says Chef. ‘You get all the preparation done the day before, so you do as little as possible on the night and spend more time with a glass of wine in your hand.’

This Beef Wellington Masterclass took place in June 2016. Masterclasses are no longer available at maze Grill Mayfair, but can be booked at either the Savoy Grill or Heddon Street Kitchen.